so disgusting, yet educational 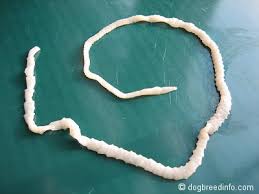 One of my foster kittens just passed a huge tapeworm, which somehow he managed to wind around himself. Ewwww! We had some debate over whether it was a worm (which I thought it was) or not (the Sober Husband thought not). Further cleaning of the object and closer examination revealed that yes, it was a tapeworm.

No wonder the poor baby has been having accidents and disgusting bowel movements. Thankfully I started them all on worm meds yesterday, under the suspicion that there were worms afoot in this litter. Incidentally I just learned that fleas are a vector for spreading tapeworms: a flea lands on an infected animal and ingests tapeworm eggs around the animal's anus, which then hatch in the flea. The flea goes on to infest other cats, and eventually a cat may eat the wormy flea as the cat is grooming. The tapeworm then goes on to attain its full majesty inside the flea-bitten cat. Oh, the glories of nature.
Posted by the Drunken Housewife at 6:21 PM

very educational. a little too much so. i do like the primitive graphic however.

where can I get me one of those?

Man that is so damn gross. I am so glad that my cats have mostly avoided fleas and worms, for no reason I can really understand.