the winners of the First, Possibly Annual, Reader Photo Contest

This blog can be such a great toy at times. I can write some ridiculous crap here requiring people to send me pictures, and many of you will actually take and email me amusing pictures! God, I love the internet.

The esteemed Hughman, our Celebrity Guest Judge, has kept a stern eye on the proceedings. For example, he adamantly disqualified the following entry:> 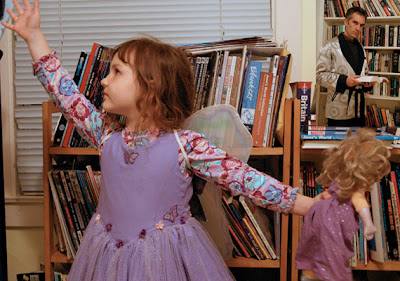 on the basis that giving a prize to my own husband would smack of nepotism. A nice photo, nonetheless, featuring the Sober Husband himself, distinguished in a silk smoking jacket, with a fabulous Fashion Girl and a background of books. This could have been a winner, if not for the ethics and morals of our Celebrity Guest Judge. 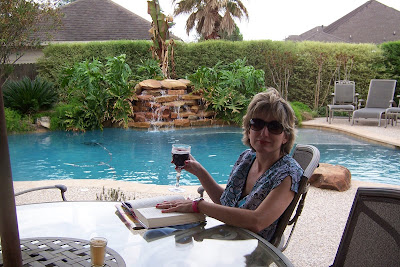 Thankfully after some discussion we agreed upon our winners! So, I present to you our Mrs. Drunken Housewife, our Texzmissy! This photo has it all: the feet are up, the cleavage is on display, and there's a drink and a book. All that is missing is a cat and a visible tattoo. In a way, there is even a Fashion Girl here, as the picture was taken by one of Missy's very own Fashion Girls, a ballerina at that. As Hughman says, "Missy got my vote for originality, inspired as she was to create a real life tableau based on the DH's blog artwork. It's like those great works of art thingys where everyone pretends like they're in The Last Supper! Only drunker! And with books! Way to go Missy!" (Incidentally the Drunken Housewife is having some real estate envy here over the gorgeous pool with waterfall and palm trees).

And next, we turn our attention to declaring our Mr. Drunken Househusband: 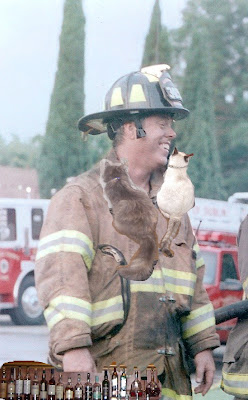 It's the one and only Silliyak, racking up another win (he previously won the Give Iris A Nomme Du Blog contest, which was quite a heated contest at that). Silliyak attempted to drop out of this contest, but the adamant judges would not permit such frivolity. If my house ever catches on fire (and it was nearly set on fire last year when our resident pet recovering alcoholic started a kitchen fire), I will want the stalwart Silliyak nearby to rescue the cats and booze! Hughman sez, "Silliyak was the only contestant to use photoshop and cleverly included DH-ish props : the cats, the wine... and fireman things! Who doesn't love to stop at a fire and stare at the firemen? Anyone? OK. Still a great pic." 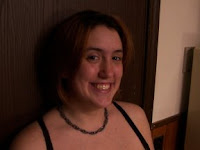 We also have a Grand Prize Winner, Jack's Raging Mommy. However, although I hate to be a callous tease, we're not going to show the hottest of Jack's Raging Mommy's pictures which won the prize. Instead, we present to you this Safe For Work Version. JRM treated us to some amazing pictures which we could showcase only if we hid her identity, and we felt it would get figured out, and indeed we do try to keep things safe for our dear working readers here. In summary, let's say that if one got Jack's Raging Mommy liquored up enough and Jack himself is soundly enough asleep, one might be in for a real treat. A devoted mommy with a raging sexuality and tits to die for: my kind of woman! Hughman says, "JRG - It's hard to get hotter than this and I say that as a Certified Gay Man. The pic reminds me of some famous painting but I can't remember which one. Oh yeah, the one where the woman has the awesome rack. Boo-ya!"

First Runner Up goes to Jim, for a great picture showcasing my twin loves, booze and books. Hughman sez, "Props also to Jim for actually looking humorous in his pic. We knew ya had it in ya." Bonus points for (accidentally) including a book by someone who has been on my To Read List for years, Exley, and for being in the state of Maine, although we'll just have to take your word for that. 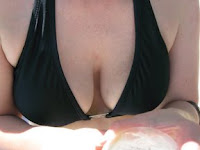 And here's our next runner-up, the formidable Lemonjuicer (gin and tits, a winning combination! I'm sure this picture will win her many fans!) We would have had another runner-up, our beloved Susie Derk (who submitted a picture of herself with the actual Celebrity Guest Judge, Hughman, very clever!), had she not (a) submitted her entry so late (I actually received it WHILE I was composing this paean to our winners and (b) disqualified herself from prizes modestly on the grounds that she had an unfair advantage in using Celebrity Guest Judge Hughman as a prop.

The prizes: our Mrs. Drunken Housewife, Mr. Drunken Househusband and Grand Prize Winner may select one of the following at their discretion: a post of their own choosing (they dictate the subject, I write it) OR an autographed photo of the Drunken Housewife and a book from her library (Their choice may well hinge upon their comfort level with giving out their mailing address. It's safe with me, as I'm far too lazy to stalk anyone successfully). Our runners-up, Lemonjuicer and Jim, may either write a guest post OR may request a post on a subject of their choosing.

Thank you, everyone, for playing!

Posted by the Drunken Housewife at 7:36 PM

Once again I blush, and suppress my Sally Fields acceptance speech.

I like to think that somewhere Elmer Fudd is going to wake up tonight and think "Wow, what a dream!"

Freaks & Geeks, Has Beens & Well Endowed Women finding a bond via streaming electrons whose existence would have to be denied if somehow tied to global warming.

P.S.
I thought texzmissy was in Egypt, what with the pyramids in the background!

I think that not displaying the actual winning pics from JRM is straight-up bullshit. I'm accustomed (however foolishly) to taking the DH at her Word. But this is one case where I will have to insist on evidentiary proof.

Classy work by our resident rescuer, silliyak, with the photoshop mastery (and proper attention to booze) and congratulations to Texzmissy on a well-done lookinthemirror ode to the DH. My compliments to Anton for clearly being the impossibly debonair dude we all imagine ourselves to be. (By the way: that thing with the numbers on the microwave? That makes perfect sense--I do it all the time and I fail to see anything idiosyncratic or odd about it at all.)

Honestly, given the props DH gave to Texzmissy and the wonderful photo of Lemonjuicer, I have to believe that the only thing that kept me from the title was a nicely rounded, firm and milky white bosom. C'est la vie, I guess.

Thank you, thank you very much to hugh and DH for this flattering honor. And many happy returns to the Drunken Housewife on her blogoversary. I humbly accept this award for all the people who couldn't be here today, and promise to use it wisely.

(I do humor, hugh. It just doesn't write very well.)

Cheers to all this little world.

There's 5 fucking inches of snow on the ground right now and more coming down. IT'S APRIL!! I spend 5 hours in a city council meeting and it just keeps coming and coming and coming and it it supposed to be fucking spring already. You'd better take my word for it, because sometimes being able to say "I'm from Maine" is the only good thing about actually being here.

(I'm kind of kidding. It's a wet, heavy snow. It's sticking to absolutely every small twig and needle on all the trees of my street and looks absolutely lovely and deeply quiet. On the other hand, it's April 4th.)

Jim, honey, if you'd shown us some skin, we might have given you a Grand Prize as well! Hughman and I enjoy beefcake as well as cheesecake. Thanks again for your entry, and next year, think beefcake!

(And thanks for the tip about the snow. I was snidely thinking, "Ha ha, all my cousins have to shovel." But when I'm shivering in the fog this "summer", y'all can have a laugh at my expense).

Okay, has anyone noticed that Jim is hot?!

Loving the entries! The only thing that would make Missy's better is me. If you could just slide me into the chair next to her... dreamy. We too, our snow covered. Bring on the warm air, swimming pools and frozen concoctions.

But I will say that it was Silliyak's contribution that really made me laugh. Love it! Very cute.

I do REALLY love the family photo.

If only I'd had a photo of my drunk ass petting the skunks while they feasted in our fire pit last summer. Yes, that would have been good ;)

I would like to thank all the little people who made this possible...who kept interrupting me after the photo wanting dinner.

And after seeing all the competition I feel even more honored. Everybody else was so creative. I just did what I usually do on Friday afternoons as soon as it gets warm enough to go shoeless.

The cats were actually at my feet, but later than night, one of them bumped into me, and I spilled another glass of wine on my library book, and I think I will have to pony up some hefty fee. But it is worth it all to be a winner! A winner at last!

Y'all can all come and sit by the pool with me...

well played all of you! it was a joy and a pleasure to be involved. the DH is a fun and mischevious partner to consort with.

i feel honored to be included in a group of people who waste wayyy too much time in front of their computers!

Listen, the guilt is eating me up. You may have heard scandalous rumors swirling around about my title. I want to come clean, Yes it's true.
I don't drink!
Alcohol and I don't get along. It's not a 12 step thing, I just don't enjoy it. Oh the shame!
I DID get plastered once in high school, but I was young and I needed the friends.
I believe I can STILL fulfill the duties of the office, promoting whirled peas, and eliminating food. Please don't hold it against me. I'M ONLY HUMAN!

Well, do you at least drink too much coffee, Silliyak?

Maybe you could find some other substance to use (in a responsible, recreational fashion) while upholding your titular duties?

ok, I got a mention, but sadly, my picture did not make the cut?
poor poor me.
Yeah, I vote half naked pictures of Jim next time.
:)

honey, I wasn't sure you wanted yours in the contest given the wording of your message, and I was literally in the process of doing the entry. Sure, I could have emailed you & inquired, but the reality was that I had a tough time getting it done before Lola's bedtime. (Ah, the pathos and boredom of my exotic life).

No coffee, no gluten, you'd think I'd be skinny if not in studly shape, but alas, 'tis Ben & Jerry that maintain my corpulent form.

If I were to do a thank you speech I'd have to give a shoutout to my friend Allan who managed to take said pictures without trying anything. Now that's a straight man with self control!


I want a book, as I am not worth stalking anyway :)

I want to see a picture of the DH!