I am now tweeting as @drunkenhw now!  I promise to send out a tweet when I post anything here, but I will also be tweeting randomly and possibly drunkenly as well.
Posted by the Drunken Housewife at 8:07 PM No comments:

at play with the eight year-olds

I am very fond of a particular game, a form of Pictionary I play on my iPhone called "Drawsomething."   Fourteen year-old Iris uber Alles got tired of this game and stopped playing it over a year ago.  "Momdude, people don't play that any more."

She sighed and rolled her eyes.  "No one plays it."

My opponents consist of eleven year-old Lola (who took a very lengthy break from the game but who returned to the game, thankfully), the Sober Husband once in a great while (he'll make a move in our ancient match whenever he feels like ingratiating himself with me), and a variety of strangers that the game pairs me up with.  I have crossed paths with some truly amazing artists, but judging by the quality of their artwork, most of my fellow players are small children.

"Look at this," I said to the children recently, showing them a rather arcane scribble.  "What do you think this is?"

The children made some insulting remarks, but as I pointed out, the player was "probably only eight years old."  How much detail and command of perspective could we expect? Gazing at the mysterious doodle,  I said, "You know how I started playing Warcraft again, after taking years off?  Well, I was playing my new character, and I didn't know how to play that character very well yet, and someone was insulting me.  So I wanted to make them feel bad, and I typed in, 'I'm only eight.'"

The children roared with laughter.  "You said you were 'only eight!'"  We all laughed until we started to cry, except for the Sober Husband, who clearly found all of this below his notice.

At the time we were staying in a cabin, rented through a resort management company but owned by an elderly couple with an unquenchable passion for nicknacks.  Ornaments covered every surface.  Iris accidentally knocked a decorative fish off a wall, and we could not figure out where it had come from.  It was fortunately undamaged, but still we couldn't cover up the mishap because we couldn't put it back in place.  The walls were still covered with plaques, pictures, and bric-a-brac, and there didn't seem to be a surplus nail or hook.  "We should leave it out with a note," I said.  All at the same time, Iris, Lola and I had the same thought:  we would use the eight year-old excuse.

In the end, I think it was Lola, who can produce a childlike writing, who wrote, "My sister knocked a fish off the wall.  She is sorry.  She is only 8."  At least we resisted the impulse to describe Iris in this note as having special needs.

Posted by the Drunken Housewife at 9:58 PM 5 comments:

dog for a day

The night before last I had terrible insomnia, epic, unforgivable insomnia.  I took two Xanax (prescribed to me for exactly such occasions), but still I remained awake until after five A.M.  At 7:00 the Sober Husband shook me awake, after less than two hours sleep, so I could drive the children to school.

Zombielike I drove the children to their respective schools and returned home, to discover a request that I chauffeur a sick bird up to a wildlife rehab center in Marin.  I took a one hour nap, drank some coffee, showered, and asked if the bird still needed driving, hoping the problem had been solved so I could take another, longer nap.  But no, the bird still was in a pinch, so I got into the car and drove across the city to pick up the bird.

Only a block from the bird I saw a small dog walking aimlessly in the road.  I pulled over and looked around.  There was no one in sight.  The dog had no collar.  I parked the car (with the sick bird in a box in the back) and spoke to the dog.  The dog cowered, as though expecting to be hit, but walked over to me.  I spoke to the dog, who began to wag her tail and look enthusiastic about our budding friendship.  I waited a few minutes and then ushered the dog into the back of my Mini Cooper. 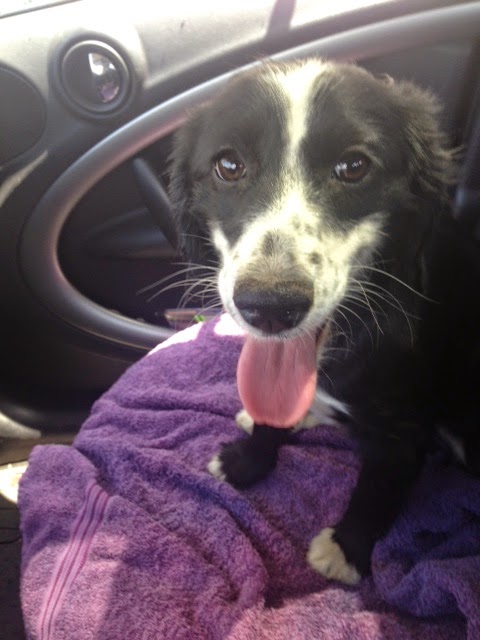 Further down the street I saw a cocker spaniel roaming idly, unrestrained and without an escort.  My heart sank.  I slowed down, but the dog vanished.  I would have normally parked and investigated, but I figured that since I had not only a stray dog but a sick bird who needed veterinary attention, I had enough on my plate.

The directions my GPS gave me were confusing, and I missed my turn and ended up on a weird, scary street where I saw not one but two small dogs without collars roaming idly.  "My God, how many dogs are there out here?" I thought.  One of these dogs was waddling very, very slowly down the middle of the street, and I had to slow down to nearly stopping to avoid running this dog down.  "Please, I don't need any more dogs, " I thought.  The dog I had taken already was climbing all over my car and poking its snout at the poor sick bird's box.

A man was seated on the curb, contemplatively throwing crumbs at the two collarless little dogs.  I decided to think those were his dogs or, if not, that he was in charge of them.  I drove off.  It occurred to me that if I ever wanted a dog, I now knew where to go for an admirable selection.  An hour or so later, I reached the wildlife clinic.  I cracked all the windows for the sake of the dog, who amiably licked my face.

"What do you have for us today?" asked the volunteer at the front desk, recognizing me.  "Sick bird," I said.  "But I found a stray dog too, when I was picking up this bird!"

I offered the dog the chance to get out of the car, perchance to pee, but she resolutely curled up on the front seat, refusing to get out.  I wondered if she was afraid I'd ditch her.  I got back in the car.  The dog expressed a lot of happiness, and I began contemplating keeping her.  I started imagining all the fun we'd have, my dog and me.  Meanwhile she sometimes disrupted my driving by climbing up on me and licking my face, and she scratched the previous pristine upholstery of my front passenger seat, but still, I was enamored.

While I was driving I spoke on the phone to the Sober Husband on my handsfree cellphone.  "Better take the dog to the shelter," he said.  "I don't have time," I lamented.  Our Lola was reading at the culmination of her mystery writing class, and I needed to be there.  I decided to drive home, leave the dog in our minuscule backyard, and then drive to the school.  The Sober Husband advised that the dog would tear up our plants, but it was better than leaving the dog in the car unattended.

I had a little trouble getting the leashless dog into the house, as clearly she wanted to explore the block.  Once we were in the home, we saw our tabby Henry, who took great offense and puffed up like a Halloween cat, hissing.  The dog whimpered, cowered, and lost control of her bladder.  I petted them both in turns, murmuring, "There, there."  The dog ate some cat food with great enthusiasm and seemed happy to go in the yard.  Henry, still angry, hissed at me even when the dog had been put out.  I cleaned up the pee.

At the reading, I explained to Lola that I was going to have to cut out early to go take a dog I'd found to the shelter.  She is used to hearing odd things from her mother and merely nodded.  Iris, who had been brought to the reading by her father, decided to go with me.  After Lola read two pieces aloud, Iris and I tiptoed out and raced home.  There the dog was thrilled to see us.  "I love her," proclaimed Iris. 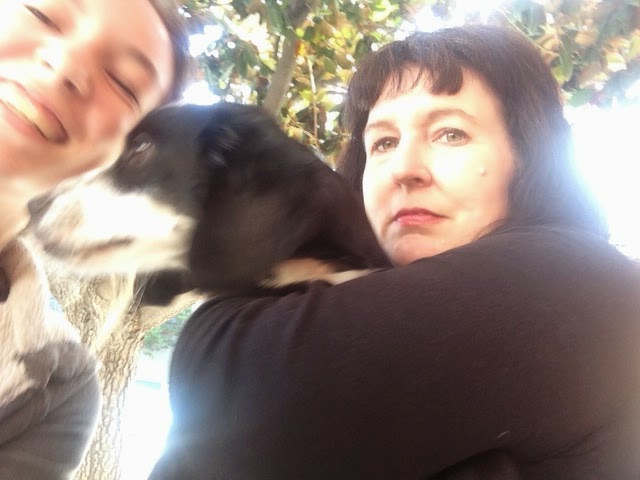 We drove the dog to the city shelter, barely avoiding accidents on the way when the dog decided to show her love for me more boisterously (my absence having caused her loving heart to grow even fonder).

Once in the door one of the staff, who knows me well as a crazy cat lady, exclaimed, "Is that yours?"  "No, I just found her," I said.  The staff were all instantly enamored of the dog.  One half-seriously suggested to another that they should not enter the dog into the system but instead just take her home.  The dog was thrilled to get so much attention.  Everyone thanked me for taking the trouble to bring her in, rather than leaving her alone.

Back at home I cleaned up some vomit my dog-for-a-day had left me in my backseat.  Throwing this away I discovered a moribund mouse in the garage, probably attacked by a cat although with no visible wounds.  I made a little box for the mouse and determined to take it to the now-closed Wildcare (which cares for rodents as well as other animals) in the morning if it survived the night.  I put the mouse's box in a quiet spot in the dining room, away from the parrots and cats.  The Sober Husband then chose to stand next to the mouse's box and shout across the house to the children.  I looked at him irritably.  "I put the mouse there specifically because it is quiet, and you are standing there next to it shouting!"

"Your work is never done, is it?" he said. "It's like Mr. Incredible, when he says he has to keep saving the world, why doesn't it stay saved?"

The next day I felt depressed.  "I miss my dog," I kept saying.  "I had a dog for a day."  Perhaps I should drive back across town and find another one.
Posted by the Drunken Housewife at 10:52 PM 9 comments:

A lot of women have been sharing their stories of misogyny and gendered oppression in the wake of the Elliot Rodger murders.  Here's my top one:

Because when I was raped, my first husband forbade me to talk about it or use the word "rape" because it was too upsetting to him.  #yesallwomen
Posted by the Drunken Housewife at 8:29 AM 2 comments: