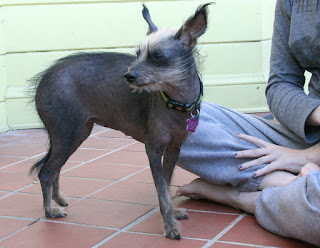 And as for me, contemplating an empty nest, I'm taking baby steps towards a new career working hands on with animals. I'm taking a night class in biology at a nearby college, and I'm still doing a wildlife rehab volunteer gig. More strangely, I've become a doting dog owner. My darling Kreecher, an aging Chinese Crested, foiled an attempted break-in at our home and is a constant comfort to her owner. My former obsession with working out has been foiled by a horrible knee injury I incurred at the gym (ironically my gym habits led to me becoming out of shape!). I limp now and have spent a fortune on physical therapy. But we managed to get me to Amsterdam, where I limped around the 500 year celebration of Hieronymous Bosch. So don't cry for me. Save your tears for the Silicon Valley engineers who must endure the loss of their chocolate soft serve.
Posted by the Drunken Housewife at 10:56 AM 6 comments: