the Aga and I 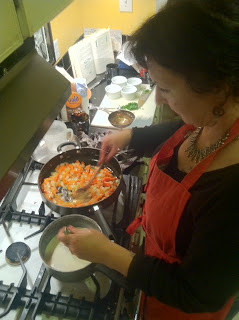 Cooking with both hands with my beloved Aga
Posted by the Drunken Housewife at 7:18 PM 9 comments:

- There is a new rule:  in my car, Florence and the Machine must be blasted at top volume at all times.  This rule pleases one child, who loves this music, but displeases another child, who gripes, "I don't see what is supposed to be so great about this Florence person."

- The foster kittens I've had since late September are back, since one developed an upper respiratory infection at the pound.  The Sober Husband called this kitten "a flopper", because since he tore out of the cat carrier, he's been racing around this house like an Olympic athlete and appearing to be in the finest of health.

- I went out clubbing for the first time in memory (how many years has it been?), and after my companion got distracted, I ended up dancing in towering high heels with a cute gay boy of only about 24 years old for aeons.  I discovered to my delight that someone out there has created at least one dark, danceable Shriekback cover.  After my tortured feet finally gave out, my new friend and I were sitting in a booth when an adorable drag queen, also of only about 24 years old, threw herself across my friend and me, draping her arms around both of us.  After we all chatted until closing time, the beautiful drag queen, kissing first me on the cheek and then my new friend, said longingly, "Wouldn't it be wonderful if we all had a house together?  If the three of us lived together in a house?"  I came so close to rudely laughing and saying, "I do own a house, and I live in it with my husband and children BECAUSE I AM OLD ENOUGH TO BE YOUR MOTHER."

- In other midlife-crisis related news, I got dressed up very fancily to go out, sans children, recently.  Little Lola was obviously struggling to find the right, most tactful wording to bring something up, and delicately, gently she said, "From this angle, it seems like I can see your bra in that shirt."  I said, "Lola, that is kind of the point of this shirt."  Oh, the horrors of a middle-aged mother dressed as a skank!

- But do not fear, all these fashion, grooming, and exercise efforts do not go wasted.  On a recent date night, I commanded the Sober Husband to give me a compliment, because I had put a lot of work into my appearance.  After looking me up and down, he said, "You have much less cat hair on you than usual."  Romance is not dead!!
Posted by the Drunken Housewife at 7:43 PM 2 comments:

Last week, two people I know, unprompted, remarked favorably on the muscle tone of my rump, one referring to it as a "toned butt" and the other as a "firm ass."  These remarks were, of course, received favorably by me, whose two chief hobbies these days are working out and making my husband admire my muscles.

Sadly the week before, in a special moment between spouses, I had asked my dear husband if he could see a difference in my posterior, confiding artlessly, "I've been really working on my glutes lately." Put on the spot, he froze up and couldn't answer.  It's a good thing others are taking up the heavy burden of noticing my muscle tone for him; the poor man is flagging beneath the weight of this onerous chore.
Posted by the Drunken Housewife at 9:40 PM 3 comments:

how the children exceed their parents

This morning Iris uber Alles breezily shared with me, "At my school yesterday, we learned meditation, and the leader said I reached enlightenment!" I asked who this "leader" was, and it turned out to be a fifth grade teacher who deemed Iris enlightened. Seeking to share this new interest, I mentioned that once, thanks to my dear old friend Kate, I meditated with the Dalai Lama. "But YOU didn't reach enlightenment!" Iris jeered.
Posted by the Drunken Housewife at 2:33 PM 2 comments:

Since September I've been weight training with rigor, and the results are unmistakable. Well, to be more honest, the effects would be less noticeable if I weren't always calling people's attention to them.

"Prod my quadriceps! See? Now prod your father's! His is just a bunch of gristle! Mine is like steel! Like titanium!" I commanded obedient little Lola, who asked, "What is 'gristle'? What is a 'quadriceps'?"

On a date night, I reminded the Sober Husband: "Feel free to remark upon my muscle tone at any moment!"

Out with a friend at a party, I was dressed in my crazy steampunk skirt cut up to the upper thigh, and by chance I found myself by a full-length mirror. I had to stop for a moment to admire my own upper leg, usually hidden in more modest attire. "Look at that," I immodestly marveled. "It's so firm." A less indulgent person would have pointed out that admiring oneself in a mirror in public is unbecoming to an adult, but my friend was kind. "It's okay, you've worked hard for it."

The best audience by far has been my gay neighbor, himself an example of devotion to the gym, who humored me by admiring my upper arms. "Now flex! Now make a muscle! Now move your arms like this!" he said, then adding kindly, "Look at that! I'll bet you could throw me on the floor and sit on me." Of course that was a gentle fib, my neighbor being like a Greek god, but I reveled in it. "Now feel my quads," I demanded.
Posted by the Drunken Housewife at 5:44 PM 4 comments:

This morning I was dreaming about candy, beautiful, technicolored candy, and my husband woke me up shouting, "You gotta come see what the carpenter found when he pulled off those shingles! There's a whole nest of termites we didn't know about! Come see!" I affixed him with an eye, a baleful, sleepy eye, and he backpedaled. "Let me get you a cup of coffee first."
Posted by the Drunken Housewife at 8:55 PM No comments:

no no no, don't make me look at any more termites

The time had come, in my opinion, for some repairs to be made to our over-100-year-old home. The deck had some highly questionable spots in it and was the home of a thriving community of Pacific dampwood termites which caused Lola to go into hysterics whenever one got into the house. (We had to cancel a date and come home early when our normally intrepid babysitter called to report that Lola's bug hysterics were too much for her). The Sober Husband's theory was these termites were not a risk to our house, because they only attack damp wood and supposedly our house's wood is nice and dry, but I wasn't buying it. Additionally the top of our house needed to be powerwashed (we powerwashed ourselves the parts which we could without risking our necks), a strange screen door frame, without any screen door attached to it, was crumbling and termite-infested, some shingles needed replacing, and arguably some parts of the house should be repainted.

To begin with, I hired one of my campmates from Burning Man to do the work, an unlicensed contractor who earns a living of sorts doing this kind of work. He took care of the door, removing the old door frame, fumigating the shell, and creating a new frame. He also did some initial probing on the deck and showed the skeptical Sober Husband just how bad things were. My Burning Man friend proposed just replacing half of the deck as a conservative measure (he seemed to have mystical feelings about redwood and wanted to dispose of as little of it as possible). All appeared well, until the Sober Husband requested an estimate. "I don't work that way," said my Burning Man campmate. "I'm just not comfortable working that way. I just like to be paid by the hour."

"But he just wants to have an idea of how much it's going to be," I said.

"But what," my campmate said with emotion rising in his voice, "if I open up that deck and it's worse than I thought? What do I do then?"

"You call the Sober Husband and say it's going to cost more than you thought," I said calmingly, but it was to no avail. "I"m just not comfortable working that way," he said. "And I don't like to drive all the way to your house." He did admit that he enjoyed eating lunch with me, but the charms of lunch with the Drunken Housewife were not enough to cajole him into giving the scary Sober Husband an estimate.

Later I laughed with the Sober Husband. "You broke my Burning Man carpenter, what with your fancy city ways! Estimates!" We laughed, but the Pacific dampwood termites were gnawing away. "Now it's your turn," I said. "You broke my carpenter; you have to get a new one."

Subsequently the Sober Husband did bring in a new contractor, one who enjoyed a manly laugh with the Sober Husband at the expense of the Drunken Housewife and her Burning Man carpenter. Now this contractor is hard at work, exposing the horrors of termites to the poor Drunken Housewife. Yesterday several times I was called away from whatever the hell it is I do around here all day to go see newly uncovered termite atrocities. "Look! Look! And it's RIGHT UP NEXT TO THE HOUSE!" was the refrain. The subtext of each of these little show-and-tell episodes was "this here, this scary thing, is going to cost you another thousand dollars." And there is no joy for a Drunken Housewife in looking at a termite. None.

I have seen the termites. I have seen the hell they hath wrought to the supporting structures of my deck. And to the side of my house, by the laundry room. I have witnessed the devastation. And all I can say is I just want to curl up in a ball on my bed, possibly with some chocolates, and never look at another termite again.
Posted by the Drunken Housewife at 9:06 AM 2 comments:

"You people think I don't exist without you!" I said. "You think I'm like Schrodinger's cat, and when you're not looking at me, it's questionable whether I exist or not. When you're in school, you think I flicker out of existence. Newsflash: sometimes I go out for coffee! Sometimes even lunch!"

Iris glowered, but little Lola took up the discussion. "I think Muzzy exists," she said. "I don't think you go out of the house, though. I think you spend the day feeding the cats and reading a book."
Posted by the Drunken Housewife at 11:26 AM 4 comments: