I'm just back again, from another solo trip. Even though only a few weeks had gone by since I'd just abandoned my poor husband and children to run away to Burning Man, my first true solo vacation since meeting the Sober Husband, I once again callously left the poor things alone to fly up to Seattle (neglecting the poor old readers as well). This trip was poorly timed, given that poor Lola hadn't even recovered from her mother's Burning Man absence, but I felt obligated to make it. My mother (traveling from Texas), beloved aunt (traveling from Maine), and a friend from high school (flying up from LA) were all going to be in the Seattle area at the same time.

This trip was harder than Burning Man, paradoxically. I found myself missing the temperate influence of the Sober Husband, who truly does keep me on an even keel. I know it seems to so many people that the two of us are a pair of misfits, completely ill-suited to each other and constantly squabbling, but he truly is my security husband. There's a small, odd thing we do, where I put my hand on his bare stomach under his shirt, which calms us both down completely, even if we're so angry either of us could happily sever the other's carotid artery with our own teeth. We've been together now for about fifteen years, squabbling and stomach-touching and rolling our eyes at each other all the way, and for a mouthy independent feminist, I have certainly become pretty damn dependent upon him. 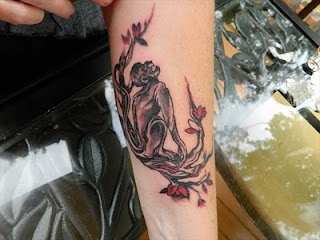 On the bright side, a trip away from my security blanket of a husband gave me a great opportunity to get an impulse tattoo. The man hates tattoos in general and mine in particular, but I really wanted one to cover up some scars. I browsed the art of an adorable young woman in a trendy tattoo shop in the U-district, but it was my mother who got a recommendation for a great old-school tattoo artist from someone in the International District. Luckily this fabulous artist had an open slot on a weekday, and soon I was under the needle.

I learned something which should have been blindingly obvious: I have a much higher pain threshold if I'm being tattooed by a dangerously attractive man, especially one who whispers in my ear while he's working that he's going to tear up the flash art for my tattoo so no one else can ever get that same tattoo again. Usually two-three hours under the needle is more than enough for me, but I spent nearly six hours, getting the new tattoo and also two old ones touched up, and I could have easily done more. "You thought I couldn't get this all done," I smugly bragged, and my artist sweetly said, "Sometimes you're surprised that a soldier walks in the door."

Back home again, the Sober Husband was a good sport about the extra art. "I can tell it makes you happy," he said gallantly. That was a far cry from his reaction several years ago when I got a piece on my right arm, when he was spitting mad. Absence must make the tattoo-hating heart grow fonder.
Posted by the Drunken Housewife at 6:45 PM 6 comments:

Eight year-old Lola says, "I feel like a person in a Guatemala prison right now... but less unhappy."
Posted by the Drunken Housewife at 11:30 AM No comments:

I'm not transitioning into Real Life easily after my sojourn at Burning Man. It's a common problem amongst Burners, a real cliche, but that doesn't make it easier for me.

And could you blame me? Here's a little snapshot of my vacation at Burning Man: I'm sitting in my shade shelter with my friend N., who accompanied me to Burning Man, as well as some new friends we made out on the playa. One of our new friends is massaging my poor, dust-tortured feet with lotion. We're drinking chilled cava. Someone actually asks me to explain the differences between cava, sparkling wine, and champagne (virtually never does anyone want to hear me prattle on about this sort of academic alcohol knowledge). Two good-looking men get into a debate over which one of them should get to fix my bike. One wins by informing the other firmly, "I will fix her bike. You rub her feet." My friend N. laughs and says, "Is there anything else you need, Mistress?" A new acquaintance of ours, a family physician from the Deep South who is at Burning Man for the first time, is speechless and stares, jaw visibly dropping open, as my friends trade places and one goes off to fix my bike while the other spends about forty-five minutes thoroughly massaging my feet. I just take another sip of my cava and lean back more deeply in my chair.

And here's a little snapshot of me back at home: I loaned the Sober Husband my car for the day, so he could attend an important, transit-unfriendly meeting after work, and I'm trying to get between little Lola's school and the pick-up point for the bus from Iris's new school by mass transit. The bus I was counting on vanished from the schedule (I later learned this was due to another one of those horrible Anonymous protests downtown). I call the Sober Husband on my cellphone and vent. "I can't get Iris on time! Muni's fucking me over, and there are no cabs anywhere!" If I don't get there in time, Iris will be driven back down the peninsula to her fancy new school, and I will be assessed a fancy new fee.

A poor, beleaguered middle-aged person can't help but pine for the dusty playa.
Posted by the Drunken Housewife at 10:22 AM 1 comment:

not a cat whisperer

"Are you missing a cat?" he asked.

An incredulous pause followed. It is difficult for my neighbor, B., to believe that I have only three cats. True, I have had as many as five permanent cats, and with foster cats, the number has sometimes slipped up into double digits. But these days there are only three cats who live here.

B. gathered his thoughts and took a deep breath. "I think there's a cat breaking into my house again. I sense there's a cat in the attic."

"Well, if it were one of mine, he'd come back out again."

A discussion ensued of all of the known neighborhood cats and which one might torment B. by going into his house (my own Henry has been known to spend quality time in B.'s garage). Finally the children were lurching up the steps to the house, squabbling amongst themselves as they went. I reassured B. "Let me know if you want me to come over and look up there for you. If there is a cat there, Iris and I can catch it."

B. shook his head sadly. The children and I went into our own house, where our cats frolicked about our feet.
Posted by the Drunken Housewife at 5:31 AM 4 comments:

Tonight one of my favorite dads from Lola's school said to me, nervously, "If you don't mind, Carole, I'm going to wait to call you until Burning Man wears off. You're kind of scaring me right now."
Posted by the Drunken Housewife at 8:40 PM 2 comments:

laughter is not so medicinal around here

After the children finally went to bed, I was sipping a glass of red wine in bed and talking to the Sober Husband. He made an ill-timed witticism which made me guffaw exactly as I was swallowing a big mouthful of wine. A large amount of very tannic red wine went down the wrong way (why couldn't this have happened while I was having an innocuous glass of water?? Or even my usual friggin' sparkling wine?)

I spent the next forty-five minutes hacking, retching, and gasping for air while the Sober Husband reassured the disturbed children. Hours later my throat still burns. It was a really full-bodied red, alas (and funnily enough the label touts this particular wine as "a ballbuster").

After I was able to breathe somewhat normally again, I remembered how Iris uber Alles once read in one of those weird fact compendiums children love so much about how many people die laughing. "I want to die laughing! How do people die laughing?" she'd say, over and over again. The next time she brings that up, I'm going to say, with new insight, "Oh no, you do not. Drowning is so much nicer."
Posted by the Drunken Housewife at 3:02 AM 3 comments:

It. Was. Frigging. Amazing.


More later, my dears.
Posted by the Drunken Housewife at 9:41 PM 3 comments: