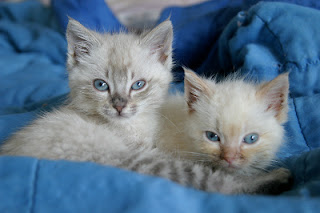 My foster kittens have just outgrown the awkward, ton-of-work stage. When I got them, they needed to be bottle-fed constantly (I was staying up late and then getting up early for a 5 am feed). It was like having a baby, except I could leave them unsupervised without fearing CPS. They were not capable of cleaning themselves, and they didn't understand the litterbox (also, they had cranky little kitten bowels). I had to do a load of kitten-related laundry every day. Also, the runt of the litter was a poor eater who was always dehydrated, and for two weeks I gave her subcutaneous fluids several times a day, and I was really stressed and concerned that she wouldn't make it.

Now they are just a joy and no work. The two larger kittens come when I call them. They are all so snuggly and dear and as cute as a Hallmark card. Of course, the cruel day is soon arriving when the two large kittens will be packed off to go up for adoption, and the runt will be separated from her siblings. The horrible part of fostering is the guilt of dropping the kittens off at the shelter, where they cry pathetically, obviously sending the message, "Mommy, why are you leaving me in this little cage? What is this nightmare? Don't leave me here!" I feel terrible abandoning them to the vagaries of life.

Last year my rescue program raised roughly 500 kittens, the overwhelming majority of which were tiny, feral kittens. If this program did not exist, many of those kittens would have been euthanized. So much fluffy joy in the world... contact me if you want some of it to be yours.
Posted by the Drunken Housewife at 5:30 PM

Silliyak said...
This comment has been removed by the author.
8:08 AM

Awww.
Pictures of kittens, normally the act of desperate bloggers (I speak from experience), but irresistable nonetheless.

I'm a drunken housewife, not a desperate one! Heh.

These little beauties have been one of the sources of stress for me lately, with all excrement (remember when I had kitten diarrhea in my hair? No, you've probably forgotten it, but yet the memory lingers for me), and with the runt's eating issues. I was so sure I'd come in the room some day and find her in rigor mortis (I have lost kittens in past seasons; last year, two died. That wasn't a s upsetting as my first season fostering. I'll never forget those first two who died. One of them I had actually planned to adopt. When he died, the husband cynically said, "Well, there's a bullet dodged.")

It's special living with a mate that always knows JUST the right thing to say. He could get a job at Hallmark.
And no, I haven't forgotten poop hair, or showering with kitten medicine. For better or worse I have a mind for small details.

Awww...Gosh, I can't even come close to expressing envy at your fostering kittens, just raising our two left me with the THANK GOD THEY ARE GROWN UP ALMOST now feeling--They lay on the window sills sunning and we all come and admire them because they are not destroying the house OR trying to kill themselves by falling from the second story (surround sound speakers are not footholds.)

DH, there's no way anyone could forget kitten diarrhea in the hair. Pretty memorable. Makes me want to take a shower just thinking about it.

Husbands do have a way of saying things. Mine said just the other day, about our very young, very foolish little boy cat, "You'll all just have to accept he probably won't live very long."

I'm surprised everyone remembers the hair thing, ha. If y'all ever meet me, you'll probably take a long, measured look at my hair before offering me a cautious hug.

Yes, the husband is a living Hallmark card, Silliyak. Once I was looking critically at my hands and said, "My hands are getting old." The husband (then a fiance) immediately said, "You're getting old all over." Our houseguest put his paper over his face to show that he couldn't bear to look at either of us and his dismay at that remark.

Oops, Gustave = me, the D. H., due to the vagaries of gmail accounts.