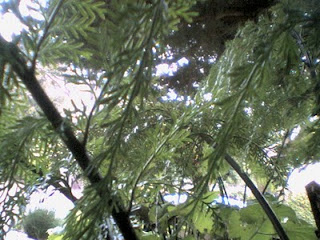 Iris gave me a wonderful Christmas present, something I had been longing for: a petcam. It is a small camera which you clip on a pet's collar, which then takes a picture every fifteen minutes to document what your pet has been up to. We specifically wanted this to see what our most glamorous pet, longhaired Frowst, got up to.

"I'm afraid we'll see a lot of dead animals", one child worried. Disagreeing, "I think we'll see his friends and other houses," a family optimist said.

What we have learned is that Frowst is much more boring than anyone suspected. You can see that he often spends over an hour without moving. When he does move, he generally seems to lurk about in trees. 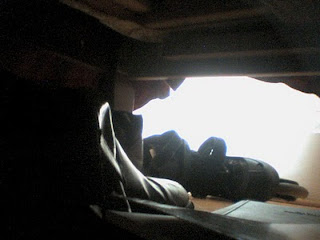 I never noticed that he went under our beds, but he spent an hour lying next to Iris's rollerblades. This is all extremely disillusioning.

It's not all over for the petcam, though. I plan to attach it to the Sober Husband when he goes back to work. "I could just take a picture every now and then," he offered, but I said that wouldn't be the same.

"You'd be thinking about it then, and you'd plan the pictures. This will be different."
Posted by the Drunken Housewife at 4:48 PM

my guess is frowst parties down and then just when the 15 minutes are up, strategically places himself in boring places. click. then back to the wild dames and wily stalking. i'm assuming there aren't wild dames at doggyo.

Where did Iris get the petcam? We'd love to put one on of our three cats...just to see if the oldest one is still sneaking off to see the widow lady down the street.

What a cool gift. At that age, I was buying my mother cheap cologne at Woolworth's, not interesting gadgets.

oh MAN i want one of those.

I got the pet cam on Amazon for 28 dollars not including tax or shipping. the brand is Uncle Milton.

you aren't supposed to tell the price! that's why you put it in a tiffany box!

if I ever go back to burning man, I'm getting one of those and attaching it to my hat.

(this is M, I forgot my passwaord, duuuh)