housework & a news flash from a sister working in a hospital 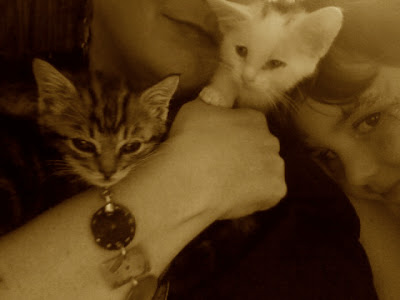 Since the readers and I have been thinking of late about housework and the domestic division of labor, I shall pass on an update: yesterday I was feeling energetic, and I spent about an hour and a half working hard about the house. Today it looks worse than ever. What could be less rewarding than housework? Incidentally a big part of this is the current batch of kittens, who are remarkably slovenly about their toilet habits. I have resorted to locking them up for large periods of time in a small pen to try to train them to use the litterbox. Today, within 45 minutes of being released from their pen, they had FIVE DISGUSTING ACCIDENTS. I have renamed our home "Kitten Hell." Lola says it is "Kitten Heaven" for her, but we all agree that it's not heavenly for me. (The Sober Husband has been quite acerbic on the topic of these kittens lately, but he is at present sojourning in Minneapolis on business). (Incidentally my forearm is not so gargantuan as in this picture; t'is a trick of the laptop camera).

But before we start imagining, as is my wont, how delightful it would be to escape all this for a lovely office, here is a dispatch from a spritely friend who works as a nurse:

Hee hee...this is kinda weird...but there was this woman that used to be the hospital phone operator. She was a HORRIBLE employee. She used to fall asleep during her shift and pull a drawer open to cover the window that would allow people to catch her. While she was sleeping, patients would call the ER's direct line and complain that they couldn't get through on the hospital's main number, so I would run down there and investigate. It got to be that I started bringing the hospital supervisor with me, we would unlock the door quietly and take her picture sleeping (10 or 20 times of proof)...but they could never seem to fire her.

Also, back then, it used to be that when she went on her dinner break for an hour, that she would transfer the phone system up to the Emergency Room where I worked and I would answer the calls for that time (keep in mind that our shift started at 12 am and ended at 8 am). She was supposed to take her break at 4 or 5 in the morning which would not cause me too to have to answer too many calls during that time (because people are sound asleep for the most part), but even then, sometimes it was difficult for me to do it if my ER was really busy. Anyhow...she started taking her dinner break at 6:30 am or 7 am (I guess she'd try to go home early or something)...

Well, thats when people are awake and have come into the ER and are calling like CRAZY.

I told my boss that it was just completely unreasonable for her to do that and she was told to take her break between 4 and 6 am instead. She was very angry at me, so she started switching the phones to me at 7 am anyway, stating that she had to pee, since she hadn't had a break since 5 am. SO, instead of her going to the bathroom that was 10 feet from her office, she HAD to go to the one that is upstairs 2 flights of stairs...Plus sometimes she would be gone for over a half hour.

I complained again and she was told not to do that...she was again very angry with me. SO, she started peeing in the garbage can in the phone operators' room which is about 7'X14' and it would stink up the entire room. When the next operators would come in, they would feel ill from the smell.

Do you know how they got rid of her? They couldn't fire her, but when she applied for a management position at [a large HMO] they gave her a raving letter of recomendation and she actually got the job. ONLY in a Union can you sleep and pee and slack so bad, and still continue to keep your job. Sheesh!

Posted by the Drunken Housewife at 4:28 PM

Feel the pain of the housework cycle.

Can't believe that woman kept her job. Somehow she must be related to someone powerful.

There are legal concerns with firing someone - even someone urinating in a trash can (wtf? hello, BioHazard can, please!) apparently. Lawsuits are expensive to defend, right?

(Hey, you should know about that!)

I never worked gummint jobs like my father did his second half of his career, but he always said there's a reason for *that* stereotype.

Re: the kittens - cute, yet after raising 2 litters myself, I know how disgusting their toilet mishaps can be.

Re: the letter: it is a sad, sad, increasingly true fact of North American existence that the only way to get rid of a shitty employee is by promoting them. The employee that was about to be fired for harassment in my former workplace was instead given glowing letters of recommendation and now works at a higher level of responsibility than ever before. I hate the working world. Long live self-employment.

When my kitty was having regular "incidents" due to a very heavy course of antibiotics, I went out and bought a "Bissell Powerbrush" at Sears. I consider it a $40 well spent; it works great for getting stains up quickly without much effort. Worlds better than trying to get crud out of the carpet with a rag. (You do need to scoop up any "solids" first, but if it can't be picked up with a wad of toilet paper, then it can be gotten with the powerbrush.)

haha, I just now paid attention to my "" addiction.

I'm glad you mentioned the quotation marks, Woman of Science! I was pondering those when I read your first comment, thinking, "Is she on something tonight? That's not like her to punctuate so irrepressibly."