for our esteemed commentator, Silliyak

Iris Uber Alles drew this portrait of Frowsty, her cat, and Al, Lola's skinny cat who is allegedly allergic to his own teeth: 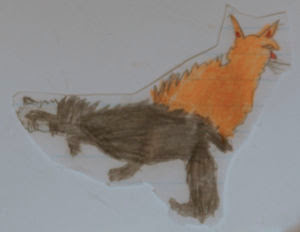 This is Silliyak's "prize" for winning the Give Iris A Catchy Nomme du Blog contest. She has become quite taken with the name "Iris Uber Alles" and uses it often. It reminds me of the Dead Kennedys' song, "California Uber Alles." (Incidentally a dear friend and esteemed hairdresser of mine, the formidable Michele, was romantically involved with East Bay Ray of the Dead Kennedys for years. She once brought E.B. Ray to my old apartment on a Christmas Eve, where he broke a wineglass and remarked casually, "Well, it's not as if it was fine crystal." It actually was the last crystal wineglass from a set from Tiffany's, now all extinct, alas (I don't think there's a thing in this house which could properly be called "fine crystal", sigh. I love the sound made by pouring water into really good crystal, but that's a pleasure for people with more disposable income and fewer children). Ray also demanded that I demonstrate that I was capable of actually walking in my fetish shoes with the six inch heels I'd bought in London, which I did. That was the closest I personally came to a rock and roll lifestyle other than being tongue kissed by Genesis P-Orridge: broken glasses and fetish shoes with an aging rock star, courtesy of my dear hairdresser).
Posted by the Drunken Housewife at 10:09 AM

Thank you very much Iris Über Alles, I am truly honored.

My best friend also dated East Bay Ray for quite a while.

i love the drawing. tho frowsty looks a little like road kill here.

Iris U.A. sketched it from life: Frowst was dozing, and Al was sitting next to him looking out the window. Frowsty does look kind of moribund.

ps. are the cats as combatant as our little princesses?

He sounds like a jackhole. Did you kick him with those shoes, or at least brandish them threatningly?

"everyone dated east bay ray" I "dated" him before, during, and after Michele. That story is so "true" to form east bay ray. Let me guess, he made no offer to buy you a new one,

Anon #1: yes, you are right, Ray didn't offer to buy a new wineglass. Ha! He is charming, though.

Anon #2: Ray is in an open marriage. It seems to work. His wife has boyfriends; he has girlfriends. Once the wife packed up some cake in a Tupperware for Ray to take on a picnic with Michele. This was ever so symbolic: she was giving him permission to have his cake & eat it, too.

I am sorry, but East Bay Ray is just a self centered ass.
All he wants from anyone is sex or an ego stroke. If he didn't play guitar he would be lucky to get laid.