my head is ready 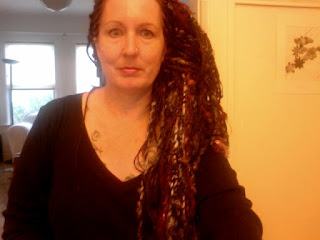 Today I spent six hours having my hair microbraided, extensions put in, and several skeins of exotic yarn woven into the braids.  My head is Burning Man ready, but the rest of me isn't.

It's early to get this done; I have another two weeks before it's time to go.  But it's practically impossible to get an appointment for braiding the week before Burning Man, and also it's very difficult to sleep on the pained, abused head for several nights after the braiding is done.  I may as well go through the uncomfortable nights here at home, so I can get whatever sleep is possible at the event.

When I drove home, I ran across Iris and Lola trudging up the hill with our friend who was babysitting them.  I honked and called to them.  They were considerably reluctant to cross the street and get into the car, frozen in spot staring at the masses on my head.

At home, our new kitten gave me a wide berth. "Look, Zorro is afraid of me!" I said.

"I can't stop staring at it," said Lola.

The negative note came from the poor, patient Sober Husband.  Taking a deep breath, he said slowly to himself, "It's only temporary."
Posted by the Drunken Housewife at 10:00 PM

Honestly, I would think any cat (much less a kitten) would be thrilled with your hair. So many strings to go 'hunt' :P