in my neon armor 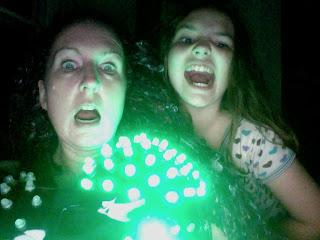 The Sober Husband and I collaborated on a project this year, if by "collaborate" you mean one person has an idea and the other one does 100% of the work.  My idea was a corset lit up with little programmable lights; I got the idea from an eighth grader at Iris's school, who made a jacket with wearable lights integrated into it.  "Thank you, I am so doing this for Burning Man!" I said to her sincerely, and she gave me a look which I took to mean that she was having a hard time knowing whether I was joking or not.

Over many trials throughout the past few months, the Sober Husband persevered in building a prototype.  The first version was on a corset, but projected out too far from my body, making me despair.  "I look so huge in this," I mourned.  "I'm sure it will look cool, but my vanity..."  Also, as several people noted, it looked like a dalek.

The S.H. was undaunted. "It's like on 'Project Runway', it's always the tailoring that is the problem."  We abandoned the idea of a corset.  For the next version, he took casts of my body and built a sort of plastic armor for the lights.  Eventually we arrived at the second version, after an interim attempt which sliced open my finger so theatrically while I was trying it on that I actually opened up an artery, dramatically spraying blood across the room.  Its running time is about ten hours, and its charging time is currently 24 hours (but the never-fazed Sober Husband thinks he can get that charging time down to 12 hours).

After the hardware was built, it was time for the software.  Everyone had ideas.  "I want it to say 'Iris!'" demanded a certain child.  I thought perhaps a Union Jack pattern would be good or a sort of rainstorm interrupted by lightning.  The Sober Husband liked a pattern like the matrix, of downward drifting strings of green lights.  Some combinations were too seizure-riffic.

Fully expecting some errors in the field out at Burning Man, the Husband fretted that it would not be robust enough to survive without him.  No one entertained the idea that I be expected to repair it.  I asked my camp's mailing list who could solder, and it turned out that several campmates intended to bring soldering irons to Burning Man.  A helpful campmate came over to our house and was trained by the Sober Husband on how to maintain the mechanism.

Tonight I'm giving it a test run in the home.  "Do normal things," the Sober Husband instructed me.  So as I write this, I am strapped into a neon cuirass.  The main things I am noticing are that it digs into the insides of my upper arms and that the lighting from below my chin is a bit reminiscent of Halloween.  I started making ghoulish faces, and little Lola was bemused, but quickly coopted.  It has not failed yet, nor caused anyone to have a seizure, but it's early days yet.
Posted by the Drunken Housewife at 10:42 PM

Somehow I imagine "he took casts of my body" is a shortcut that covers interesting stories.

Totally awesome! I do wonder about Playa dust versus electronics...

She's not so "little" any more! And yeah, the underarms are where corsets need special fitting too. (I used to do Revolutionary War re-enacting.)

You do have the potential to look like a modern day Valkyrie, between your flowing tresses and the corset!