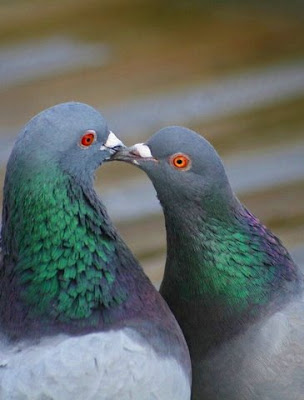 This is Iris guest blogging.


I call myself the squirrel/pigeon whisperer. Because that is what I am. In GG park, there is a really big playground. And in that playground, there is a squirrel. I named him Squabble. I visit him every time we go to the playground there, which is often. He is very friendly with me. One time he walked up to me and stared at my foot. I was kind of freaked out because I thought he would bite me, but I didn't run away. Then he sniffed my foot. Then he walked away. But he is pretty freaked out by everyone else, especially Lucy, who has tried to become friends with him as well.
At the playground there also lots of pigeons. They are also friends with me. Particularly 6 who I have even named.

One time I was feeding pigeons while Lucy was playing and I was sitting with Momdude. And they all loved the food. Then I saw gimpy and felt bad for him because he couldn't run over to the food like the other ones, and I threw some food at him. And then he caught it in the air!!! It was awesome. Then a couple days later Momdude was sitting on a bench throwing pretzels at the birds and they all just stared at the pretzels, not even realizing they were food. Then I took the same pretzels and tried feeding them, and they went crazy over the food. This is not a coincidence! They know me, and now that I would not throw stuff at them unless it was food.
Then yesterday we were walking back to the car from the playground and I had some extra food and I saw a squirrel and some birds looking for food so I threw some at them, then they went crazy an started flying at me and before I knew it there was a herd of birds running after me on the ground.

Iris, yer link doesn't explain "chumums." I know what they are, because I hear you & Lola yammering about them all the time, but no one else will (Lola doesn't even read here).

Iris, I can hardly even *read* this without freaking out!!! I'm really old now (Like, older than dirt. Really!) but when I was about your age, I was standing in a park in Boston watching a little girl feeding the pigeons, and some pigeon who must have been miles away when the call went out, flew in from behind me -- low and silent -- fully-fixated on the peanuts -- *just* as the wind blew a piece of my hair up. Before I knew what was happening, there was a pigeon's foot caught in my hair! I was screaming and flailing around all over the place. The pigeon was squawking and flapping around all over the place. It was quite a scene. Needless to say, I have been mighty nervous around birds ever since. You are very brave!

(But be careful! Keep those eyes in the back of your head wide open at all times!!)

dear Carroll: sadly I relive your trauma routinely. My poor, stupid parrot often stands on my head, even though she should have learned by now that her feet get entangled in my hair, and she squawks and flaps about as I try to disentangle her. That bird is so dumb... so very dumb, poor thing.

Chumums celebrate hanukkah and like to eat mostly pink things, which is 'maybe' their favourite color - this is all I know about them, and doesn't explain pigeons being Chumums.

I believe there's a YouTube video that sheds more light on the subject.

Iris--Gimpy has a brother pigeon in Tucson. His name is Stumpy (because he was missing one of his legs), but MAN, he knew how to work a crowd. My husband and I would bring the birdseed to feed the birds--Stumpy was always out in front of the others, getting more than his fair share (I'm a socialist when it comes to feeding the birds).

peoples, my link does work. If you look in the archives and look at some of the older posts, it gives a very good explanation of a chumum.

Hmm...well, I did learn a lot about unicorns from that link!

On a radically different topic, how was camp? And how did the girl who was so upset about getting on the bus eventually do?

Iris, my family and I camped seasonally for many years and we hand fed the chipmunks (peanuts). It was amazing. Still.. years later, we'll pass the *big* bags of peanuts in the store and the kids will ask if we can buy them for the chipmunks. Sadly, we haven't a chipmunk near our house (and we don't camp *seasonally* anymore). I rarely even saw a squirrel in our neck of the woods (they are spotted all over in other parts of our small VT village). UNTIL! Last week when our 2 year old (big fat) calico Maggie came running around from the back yard- a grey squirrel leaping in the air! Maggie had it, but it got away! Yay!

In May our family spent the day in NYC and quite a few hours strolling through Central Park. We saw this guy who seemingly had seeds stuck to his clothing. The pigeons were WELL aware of this. They were very gentle and *rode* him while having a snack. It very much reminded me of the pigeon lady in Home Alone! I sent mom a picture (which does nothing for the experience.. but you'll get the idea. He was on rollarskates!).