a tourist in the land of black women's hair 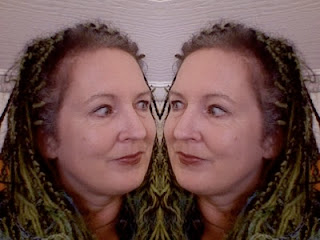 Back in the nineties, I worked at a large, conservative law firm. We were all very conformist in our grooming, and things were much more formal then. We female associates wore pantyhose all the time, no matter how much we hated those hose, pumps with moderate heels, and wool suits. I lived with the constant fear that someone would realize I had a number of tattoos (at a couple of social events, I pretended I was coming down with a cold to explain why I was not getting in the pool/hot-tubbing/dressing lightly). But at least I got off easily in terms of hair.

One day another associate burst into my office. "Have you seen R.'s hair??? It's in a million tiny braids!" One of the two African American female associates (sidenote: we had no black male lawyers at all) had gotten her hair braided.

Everyone talked about this poor woman's hair behind her back. I was very close to the other black lawyer (who lives in France nowadays; I miss her so much to this day even though I haven't seen her in fifteen years), who was offended that there was so much gossip about the other attorney's hair. I said, mistakenly thinking I was making a diplomatic remark, that "you can't do something really elaborate with your hair and expect people not to talk about it." I compared it to my getting slammed by a partner for having dyed-black hair as a summer associate. My friend disagreed strongly and said firmly, "It's a basic style for black women. Classic. Simple." I didn't agree but I felt disqualified on the basis of skin color to argue the point. I was glad to drop the subject.

My friend complained at times about her own hair, which she never braided. "It doesn't look right," she said once, mourning the fact that her hair didn't move in the wind. I said I thought it was sad she felt that way. We agreed about that and sat silently for a moment. Actually I thought her hair looked great, but I knew she put a lot of work into straightening it and using hairpieces at times. I myself would have loved to have had a natural 'fro which held up to a breeze, because I hate how my hair looks when the wind blows it around. There's nothing pretty about windswept, frizzled bangs.

Oddly around that time I somehow got on a mailing list for a catalogue aimed at black women, and I found the extensive hair products section mesmerizing. My favorite part was the wigs: those wigs were so beautiful. I teetered on the brink of ordering one for myself, but somehow I felt it would be wrong for me, a WASP, to order one. It would be too much like tourism, too much like I was having frivolous fun when the other people were being extremely serious. I knew from my fellow lawyers what a serious business black women's hair could be.

A few years later I was practicing law on my own, and one of my clients was unhappy one afternoon. She told me she was going to get her hair rebraided straight after our meeting and that it hurt so much she dreaded it, but she felt she had to do it because she could not deal with straightening her long hair. I had never thought of that hairstyle, so controversial at my old law firm, as being painful. 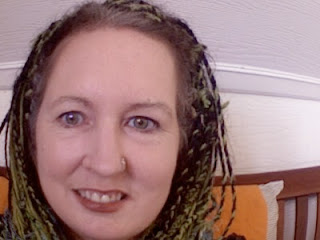 In the world of Burning Man, many women took to getting their hair braided as a way of dealing with the omnipresent alkaline dust, strong winds, and difficulty in getting a good, thorough shampooing in the desert. I myself never did, I was always fine with my hair out there on the playa, but this year I felt reluctant to deal with Iris's hair there. Iris needs to wash her hair regularly, and I didn't want to set up a shower at our camp. Also, Iris's long, fine hair tangles so readily, and I didn't want our trip to be marred with disagreements over whether she had adequately brushed her hair. I asked Iris if she'd be willing to get her hair braided before our trip. "It will hurt a lot for a couple of hours, but then you won't have to brush it for a month. And you won't have to wash it, either." She decided she would. I found a place on Yelp which got rave reviews from Burner chicks and African-American women alike, and I booked Iris in.

When I dropped Iris off, we looked through a book of client photos. Page after page of clean-cut black women, smiling professionally, were interrupted occasionally by a picture of a wildly grinning white girl who was clearly playa-bound. The owner encouraged us to think about adding yarn to Iris's hair, and Iris picked a beautiful brown and blue mohair-blend skein. I kept looking at the pictures, and the owner smiled at me. "Go on!" Impulsively I decided to get my hair done as well, with mermaidy green and blue yarn.

We were there seven hours. Seven hours. And the pain was agonizing. It was more intense than most tattoos. At night, laying our heads on our pillows was agonizing. We had constant headaches for the first week. I kept the Motrin flowing.

Iris and I kept our braids in for over six weeks, and we soaked up lots of adulation during those weeks. True, some of the other parents at the girls' school gave me a bit of an odd look at pick-up time, but others were full of praise. "You're bringing some color to this place!" an always-friendly mom gushed. For me, I found I looked at least a decade younger with those green hipster braids. A waitress in Reno assumed Iris and I were sisters. I loved also not having to do anything with my hair. It was so freeing, having what was really like a piece of art on my head instead of hair needing to be washed, brushed, combed, and styled. I'd have kept the green braids forever, but I was running into the problem my old client lamented, that around the six-seven week point the hair has grown too much and they need to be redone (especially if, like me, you have dyed hair. An inch of undyed roots was too much. I took the pictures here the day I went in to take out my beloved green braids). And I had some occasions coming up when I needed to look more conservative.

Getting them out was agonizing as well, again as intense as a tattoo, and again I remembered the black lawyer with braids from my old firm. How awful, I thought, that on top of dealing with all the white people's gossiping, she undoubtedly had a headache as well, and all just for having easy hair.
Posted by the Drunken Housewife at 6:29 PM

You probably won't read this since this blog entry is so old. But if you haven't seen Chris Rock's documentary called "Good Hair" it's a worthwhile watch to see the plight of a black woman trying to get a good hairstyle.