the winners of our Annual Readers Photo Contest!! 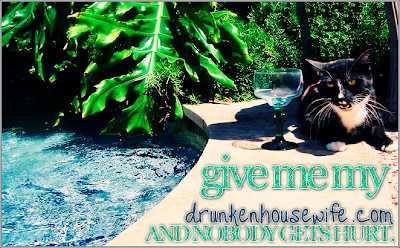 Once again your aging sot of a blogger commanded you to enter your photos for her amusement, and you rose to the occasion, you darlings (or at least some of you did. The rest of you are just skating by and will need to make it up to me next year). You may wonder, "Why the hell has it taken so long for this contest to wrap up?" At first, we (meaning Celebrity Guest Hughman and I) extended the deadlines to let some late entries sneak in, and then we extended it again, and then I was preoccupied, and then finally I did declare the winners and write it all up. However, only one of the pictures would show up: the one I uploaded to Blogger from my main email account. 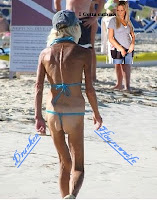 The others, sent to my gmail account, wouldn't load, even though they seemed to upload normally as I was composing the post. Evidently there is some bug, which makes no sense as Google owns both gmail and blogger, so one would expect them to go together like Armagnac and prunes (and if the image of Armagnac and prunes causes you to recoil, you need some more classic French desserts in your life. And while we're meandering, I have an anecdote: I used to have a pet rat, Leo, who lived cagefree. He occupied my apartment like another resident, which was delightful most of the time, but once I left out a Tupperware container full of prunes marinating in very good and expensive Armagnac for a planned dessert, and he ate all of it. Poor Leo must have felt like hell after eating his bodyweight not only in Armagnac but again in prunes). Anyhow, so finally a week later Hughman has nagged me into trying again, and here we are. Let me just say that I am hating gmail today.

Last year's winner and current holder of the Mr. Drunken Househusband title, Silliyak, weighed in with an unusual choice, a sad anorexic woman viewed from behind. This disturbed me, but the more blase celebrity guest judge Hughman said, "Frankly I can see this on the streets of LA every day." 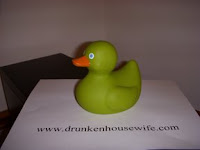 Our beloved Carol Ann shared her travel duck with us. She explains: "This green rubber duck always go with me on trips and gets his picture taken. He's been to Vegas, Disneyword and Disneyland, and New York City, among other destinations. So, I decided that he should visit your blog." Awww! Hughman sez, "I love the duck. Is this where you get Green Eggs for Green Eggs and Ham? I wish the duck was swimming in a cocktail." 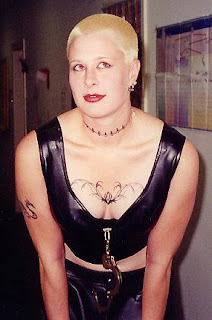 A new reader, April, gave me a scare. She sent in two pictures of herself, and this one, in thumbnail size in my email inbox, made my heart pound for a moment (and not for the same reason some of you readers' hearts are pounding as you gaze upon it). This picture, when tiny, looks uncannily like I did in the early nineties. I had very short bleached blonde hair, bright red lipstick, and a dominatrixish wardrobe for the weekends. For a moment, I thought our sprightly April was a stalker from my past (and I have been stalked; I have been stalked on two continents). When I opened the picture up to full size, I felt like an idiot, since her tattoos are quite different from mine and our facial features are different. Obviously April is my soulmate and not a stalker. If only we had teamed up back in the nineties; we would have been unstoppable. However, as Hughman noted, April is not going to take top honors because she hasn't added the Drunken Housewife URL to her picture, but she has a special place in our hearts (and I note that as I was uploading the picture AGAIN today, pulling up the thumbnail gave me a start once again. My god, it's uncanny). 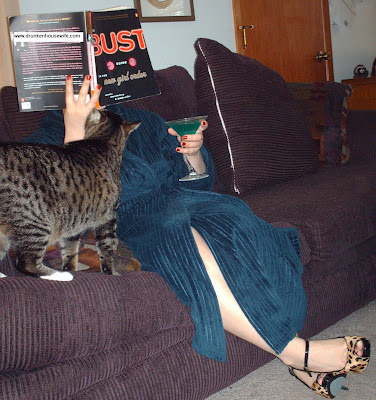 Captain Steve had a very thoughtful entry, which really captured that Drunken Housewife zeitgeist. A book, a bathrobe, a cat: c'est moi. Hughman says, "It's all about the shoes. Kudos for including cats, cocktails, leopard print and Bust all in one pic."

Hughman and I felt that nothing could beat Captain Steve's entry, but a last-minute effort from defending champion Missy, holder of the Drunken Housewife title, blew us away. We loved the cat, the snarl, the cocktail, the beautiful colors... This had to be the winner, and it's ensconced at the top of this entry. However, I am declaring Capt. Steve to be Iris Uber Alles 2008, a new title! 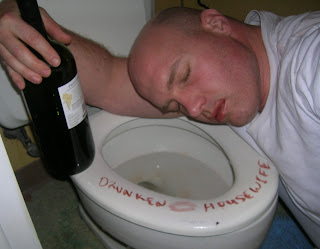 Although the fight for Ms. Drunken Housewife 2008 was a hardfought and close one indeed, the Mr. Drunken Househusband 2008 was all too easy to call. Our dear Maine commenter, Jim aka "Brown" submitted a bold and carefully thought out entry which had Hughman musing, "Who can resist a man in lipstick? Sure he's supposed to be drunk but still he's not afraid to show his housewifey side." The only thing wrong with this picture is that it brought back unfortunate memories of my hideous bout with salmonella earlier this year, shudder; but of course that makes it all the more a propos. Jim, you are Mr. Drunken Househusband 2008! Enjoy your reign and don't abuse your powers!

Missy, Capt. Steve, Jim, Silliyak, Carol Ann, and April: please contact me to discuss your prizes (your choices include a book from my collection selected especially for you, darling; a t-shirt modified by me (I'm in love with my "108 Ways To Use A T-shirt" book); ordering up the post of your choice; or commandeering the space for your own rantings).
Posted by the Drunken Housewife at 7:37 AM

congrats and thanks all!!

The green duck says thank you!

Get a job you fat drunk bitch.

iris! that wasn't very nice! besides, your mother isn't FAT!

Why should I take a job away from some poor less qualified person who needs it more?

Incidentally, anonymous angry person, reading this blog is optional. Feel free to find some other blog written by a sweet, skinny, employed person to read (not that this description would apply to you, of course. Kind, thin, secure and well-employed people tend not to run around spewing anonymous venom).

i hope you weren't really offended by that bullshit comment. i tried to add a bit of brevity to the situation.

any ignorant bumpkin can comment here on the web, especially when they have the chickenshit option of commenting under supposed anonyminity.

at any rate, they obviously aren't constant readers of your delightful blog nor are they eloquent in any way (or clever) so enough of them.

thank you, my darling Hughman whom I love.

No, I'm cool. On the rare occasions I get a hate comment, I leave it up. I figure that gives me more credibility. Usually the hate comments come in on the Elizabeth Wurtzel post (Wurtzel fans are vitriolic, I'm telling you).

I curious as to what elicited the vitriol. Current content seems essentially innocuous.

If he was an actual reader, then he'd realize that your children's activities leave you no time for employment!

i can only assume it was some kind of jealousy. after all, the DH obviously has a loyal and participating fan base. if this coward had read through the past comments they would have realized how smart and perceptive the DH is (why I became a fan and friend).

The regular reader of my blog may have noticed a reference to my recent election to an office. As I stated after being nominated, this is just a stepping stone to a higher office.
I request that my prize be the right to use my two titles as resume fodder. (There's not much else actually)

I am so excited to be Iris Uber Alles 2008! I know I can never live up to the title, but I will try to do it proud. Also, Captain Morgan (the cat) thanks you as well.

I'd like to thank the photographer who somehow, pre hoc, found a photo of me celebrating the recent, and enlightened, California Supreme Court Decision in In Re MARRIAGE CASES with a case and a half of my own.

This was fun - I'll have to send something in next time. My only question is why don't you let your readers vote? That said, I think I agree with the opinions of the Drunken Housewife-Hughman junta.

junta!!! i LOVE being part of a junta! i'm thinking eva peron in fab suits!

i call dibs on the JUN part!

Because, honey, it's not a democracy here. It's a one sot show. Hughman is the only thing tempering my autocratic rule!

Incidentally I have just learned that the cat in the winning Missy pic was photoshopped out of Mr. Missy's arms by Missy's genius 15 year old, who also photoshopped in the text. The next generation is truly going to conquer us all.

Upon a more careful reading, I didn't actually win anything did I? Are you toying with my Alzheimer's?

Silly Silliyak, I said a prize goes to everyone who enters. Sadly you have been dethroned and have no title (you have all year to plot your revenge upon Jim!), but you still get a "Thanks for Playing" prize.

In lieu of the wonderful prizes listed, how about a "Get out of Hell" certificate from Lucy.

Or if that's too much, maybe a certificate for a glass of ice water in hell.

I get a prize! Yay! I am unlurking to say thanks! :) Lurker, not stalker. LOL