Attention: It appears that some delightful person is passing around the URL to this post, trying to stir up cat lovers into a frenzy of hatred against me. Evidently the person in question has much more heart than brain (or reading comprehension). As anyone with a reasonable grasp of the English language should understand, here I was venting about my sorrow over parting with my FOSTER KITTENS. The word "foster" means that these are not the offspring of any cats I own. My personal pets (all rescued animals) are neutered (with the exception of the parrot, but no one has sex with her). Indeed, I am a volunteer for a nonprofit rescue group which takes the youngest and sickest feral and abandoned kittens. At times I set my frigging alarm clock so I can get up and bottlefeed ill and underweight feral kittens. As part of a small and lean rescue, I spend far too much of my own money on supplies and far too much time cleaning up kitten diarrhea and vomit. Besides assisting cats, I've also washed oiled birds at oilspills and handfed an orphaned baby beaver, as well as driven all over the state of California ferrying rescued rats around. So indeed, dear animal lovers with a poor grasp of reading knowledge, please go protest a veal farm or something and stop harassing someone who actually does put in a great deal of time every single frigging day towards helping animals. You also owe me an apology, but I won't hold my breath. 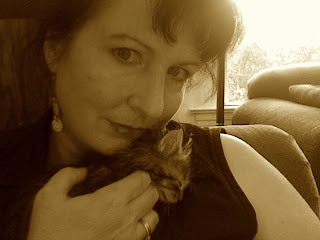 Some of my foster kittens are ready to be put up for adoption, and that means that tomorrow I'm going to take them down to the shelter. There they will be inoculated and put into a very small cage, where they will live, surrounded by the cries of the other cats, until someone adopts them. That could be a very long time for two of them indeed, because you see, they are black cats.

People often argue this point with me as though they are certain I must be mistaken about this. "Really? People don't like black cats? Where did you hear THAT from?" Funnily enough this argument sometimes comes from people who own orange cats, the number one most popular cat color. One of my current herd is a fluffy orange boy with a loud purr, and he's going to fly out of that pound. I'm not worried about him. But I am on the brink of tears already about my black kittens, and the word from my rescue is that the shelter already has a lot of black kittens rotting around in those little cages.

I hate taking my kittens down. During their time with me, they usually forget whatever horrible things happened to put them in the foster care predicament. They become bold and confident. They meet me at the door when I come home, and they create havoc on my bed when I'm trying to sleep. They frolic everywhere, and, poor deluded darlings, believe this is how their lives will be. Then the day comes, and their beloved lady sets them down on a cold, metal table and walks away, even when they cry after her.

The worst came one day two seasons ago, when I dropped off some kittens and watched as they were installed in their little cage. A few cages down some kittens languished that I'd dropped off a long time before. "Oh, no, you guys are still here!" I said. The poor things recognized me and were freaking out with joy, no doubt thinking, "I knew she'd come back for us! Now our nightmare is over!" I asked the shelter worker if he could take them out for me to hold, but he was harried and it would have involved breaking a rule (Shelter Rule # 5,432: No one -- not even a foster parent-- may handle a cat unless she has been pre-screened at the front desk and given a pass). Also, I needed to go pick up Iris at school. So I left without even holding them, and they cried so desperately as I walked out that door. I felt like the world's biggest jerk. Even now tears come to my eyes remembering that.
Posted by the Drunken Housewife at 10:37 AM

this is exactly why, noble as your mission is, i could never ever be a foster parent.

I was a foster parent once to a trio of sweet kittens through the local animal shelter. I will never forget that experience as long as I live. It was one of the most wonderful and heart-wrenching experiences. I had the best time, but I had a nearly impossible time giving them up. I started this journey when they were 10 days old. I applaud you for being a regular kitten foster parent. Luckily, I got to keep one of my babies. I call her Elsa. Have you seen the movie: Born Free?
-Nicole :)

OMG that never even occurred to me. That is SO sad.

Exactly what Hughman said so eloquently.

I don't know how you do it. It would break my heart, and I'd end up with all the kitties back home with me. I cried when we dropped off strays at the shelter - we had them for all of one day. We actually did end up keeping two kitties (for a grand total of four in our home) because it took so long to find a shelter to take them, we couldn't give them up by the time we had the chance.

I have a black kitty. We actually adopted her from a little cage when she crawled out from under her blanket, purred her way to my husband, and bit him on the nose. We knew she had just the right attitude to make it in our house. She hasn't disappointed us.

I have also decided that I will *always* have a black kitty. If we weren't at full kitty capacity at the moment, I'd drive up north and pick up one of your little black angels. Poor dears.

also, i cry at the end of Jon and Kate Plus Eight. the end.

Why didn't it ever occur to me that fostered pets don't always get adopted, and they probably have to go to a shelter eventually? That makes what you do even more amazing! As for me, I'm in the "I'd end up keeping them all" camp. I found a dead baby tarantula at work and brought it home so the kids could take it to school for show-and-tell. Three weeks later it was still in my fridge in tupperware because I felt too guilty throwing it out. Yeah. I finally asked my husband if he'd "take it out back and bury it" and he said he would. We all know it went in the trash, but I can tell myself that he buried it.

I have a friend with three black cats and she first told me of the poor black cat issue. It's one of the reasons we picked a black cat (white nose markings) two summers ago but ended up getting her tabby brother also.

As hard as it has to be to hear them crying, look at this way, they had n chance before you took them, and at least they have a chance to have a good loving home after they've been with you.

Man I just got sent here from digg and I was expecting p0rn. I mean druken house wifes. Come on! I dont see alcohol, I dont see drugs and must importantly I dont see skin.

Looks like DoggyO has a little more refining to do...

I could never be a foster parent of a child or a pet. I'd want to keep them all, and then I'd be the crazy lady in a shoe.

Ha, Fabricio, you wanna go a bit further back. With some poking around one can easily find some hot cleavage pictures here (remember Lemonjuicer's?), sordid tales of sex in public bathrooms, etc...

Hokgardner, I wanted to adopt for a 3d child (ain't no way I am doing pregnancy/labor again after my hellish pregnancies and Lucy's delivery... let's just say that I understand now why so many women didn't survive childbirth in the olden times). The husband won't go along with it.

i feel like a celebrity when my name is brought up in your blog and comments!

Be sure to post if your shelter needs additional foster homes!

get your goddamn cats spayed and neutered. stop filling these animal shelters with poor kittens. its people like you that make it so hard for animals to live happily.

you would think after the first time you left the poor animals in the shelter you might have learned a lesson. guess not.

Anon, if you read as well as you jump to conclusions, you would realize how incredibly ignorant you sound. And if there were people here who weren't already responsible animal owners/caregivers, you would be a poor representative of those who care about animals and nature. Face it, you're just a hater addicted to righteous indignation. Get help, you'll be happier.

Get your damn cats neutered. just keeping them around and having babaies tah tyou turn over to the shelter is irresponsible.

her cats aren't having babies, you anonymous idiot. she foster cares kittens that have been born elsewhere until they're old enough to go to good homes. read before you spout off ignorant posts.

H, Someone is out of school and using mommies computer (without spellcheck) to try and get a rise. If they really cared about animals, they'd be volunteering at a shelter.

Dear Anonymous Who Is Reading Challenged,

Take some of that anger and go back and read the post again. Notice where it said "foster kittens"? Foster kittens are feral or abandoned kittens.

My animals, who are all rescued and formerly abandoned to begin with, have long been neutered. I work with a nonprofit cat rescue as a foster parent for underaged and sick kittens and cats.

Dreadful. My two come from foster homes and they live a life of indulgence and luxury that I really envy. But I feel so sorry for those who are left behind.

*sigh* so bruising, a cry from a kitten in a cage. i commend you so much for what you do. i don't think i could do it. i would want to keep them all and then i would get taken away to jail for harboring millions of cats in small quarters. OH! have you seen that video on youtube about the woman with hundreds of cats and the frenzy that ensues when she goes to feed them? i'll try to find it and send you the link...it's the craziest thing i've ever seen in my life. and i have an orange cat (she says sheepishly) but it's because when i went to the shelter to get a cat, she purred like a damn diesel engine when i picked her up. she's the best cat in the world. i'm just sayin.

i found it!
http://www.youtube.com/watch?v=bp0Q3UJHrkU
this freaks me out. her outfit, however, IS smashing.

OMG, Monkey, thank you! The beginning, when there are cats leaping out of this surging ocean of felines, is just amazing.

Iris says, "Siberia! We're going!" We want to visit her!

Mondi (my beloved spoiled rotten black house cat that lets me live with him) shed a tear over the plight of the black kitties.
I have always preferred black cats (my 1st one I picked out myself when i was 3.5 yrs old). I never knew that they were the least fave color out there.
Kudo's to you for fostering, I could never do it, I'd end up w/ 50 black kitties in my little 1 bedroom hovel of an apt.
xoxoxo