holes in our heads 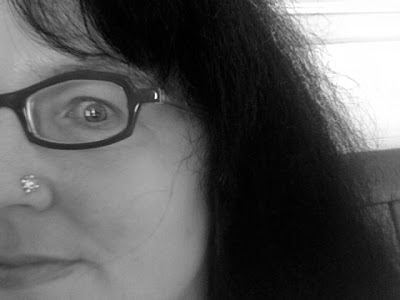 Last week when I was at the ER, I took out the piece of tribal-looking pearl jewelry I wear in my nose for the CAT-scan. I couldn't remove the little ring I wear in my tragus (the little flap of cartilage in the center front of your ear) and the nurse couldn't get that off, either, so I just went through the CAT-scan with that in, and evidently it didn't prevent the CAT-scan from working. A couple of times over the next few days I tried to put the pearl back in my nose with no luck; I was so miserable and stupid with pain and painkillers that I couldn't manage it. Nearly a week later I tried again and realized that my nose piercing had partially healed over already and it was just going to heal up more if I didn't get something back in it, and in a moronic moment, I forcibly re-pierced it myself, at home, under less than antiseptic conditions, because that seemed easier than driving over to Haight Street to have it done by a trained professional. Luckily for me there were no bad consequences other than more pain for a day; I was kicking myself mentally, as the last thing I need is a fresh new infection somewhere on my head.

Tomorrow I'm taking just-turned-seven Lola to have her ears pierced, Lola having promised that she will disinfect her ears dutifully and not fuss if she loses an earring. She has been nagging me for some time to get her ears pierced, and she's planning to rehearse tonight how she will sit still and hold her mother's hand. The Sober Husband is opposed to all sorts of voluntary needle usage, from piercing to vaccinations, and he will be safely ensconced far away at the office during this procedure to spare his delicate sensibilities. Indeed when I had my nose and tragus repierced after turning 40, he was distinctly pissed. Back in the day I was one of the Modern Primitive pioneers, getting various piercings from the Grand Master himself, Jim Ward, in assorted sordid basements before piercing became legal and regulated, but over the years of lawyering, I allowed virtually all of those piercings to heal up. After turning 40 and realizing that I have a lot of freedom now that I'm no longer an attorney, I got a few of those repierced, which made me happy. I felt younger looking in the mirror, and I was willing to put up with some marital wrath. The Sober Husband fought in vain to get me to take these piercings out, going so far as to cut me off sexually for a while. When he admitted he was doing that, I wasn't angry. I laughed uproariously. "YOU are cutting ME off?" He wasn't able to maintain that position for long.

Despite their father's shudderings, the children are more interested in following their ornamented mother's path than their father's more utilitarian one. My own father was deeply opposed to all forms of piercing, forbidding me to have my own ears pierced when I was young. It wasn't until I was 18 and a legal adult that I could even get my ears pierced at all. My father's argument was "you might as well put a bone in your nose; it's just as barbaric", and to some extent, I suppose he was right. A pearl is not a bone, but tribal-looking is not far from barbaric.
Posted by the Drunken Housewife at 1:21 AM

that's a big ass nose stud. i had my ears pierced in the early 80s (a ring in each ear) and my mother was horrified. she thought it looked "too gay". HA! i wore them for about 15 years until every tom, dick and harry had them so i took them out.

I had a tiny, tiny emerald in it for a couple of years and just picked up this more garish ornament recently. I love it because it goes with everything.

I had my nose pierced in college and let it close up. Now I want it pierced again, but my husband is very much against it (he says it's not "me", whatever that's supposed to mean). Inspired by your post, I'm going to do it over his protests.

Is this the first time you've posted a photo of yourself?

Finally, Anonymous comments are back. I can comment again!

Amy, SH posted a family pic about a year ago, with some of her tats showing.

I thought the pic of you in the ER was kind of hot. But I'm weird. Of course, it could just feed into my gender's need to protect a pathetic looking woman. Or perhaps to take advantage of a weak woman? I don't know. I never delve too deeply into my motivations. I'm somewhat afraid of what I would uncover.

This reminds me of the time I took my tongue stud out. After 5 years, the hole closed up in a couple of hours.

Nowadays, people (even strangers) will be talking to me and ask if I ever had a tongue stud. The scar is quite prominent.

Your new stud looks like the earrings I wear every day, without fail. I never take them out because, yes, they go with everything (and I'm super duper lazy).

Dear Drunken Housewife,
I just read the article in SF magazine about stay at home moms, and can't quite put my finger on all of the different parts of it that have gotten up my ire. I would be interested in reading a response from you.

Ha, Alan/goatse, I know just what you'd have done if you'd been in that ER. You'd have rigged up some gravy in my IV.

Anonymous, I haven't read that article. I'll keep an eye out for it...